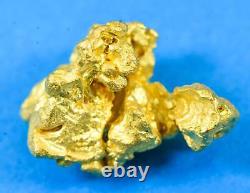 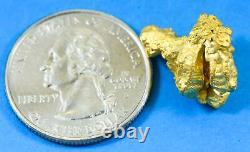 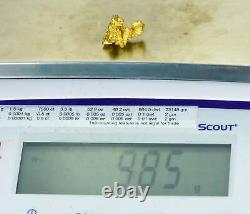 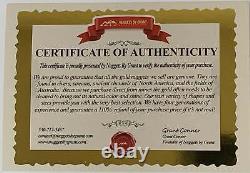 Australian Natural Gold Nugget Weighs 9.85 Grams. Most of my Australian nuggets come from Victoria's Gold Triangle area. Australian nuggets are very high in purity running from 94-98% pure. All Nuggets are Pictured or Partially Pictured with a U. S Quarter which is 24.5MM in diameter to give you an idea of Size Proportion. Natural Gold Nugget Pioneering from the Australian plains, fields, & the tip of a metal detector uncleaned direct to your living room..... Through using my resources at the world number one Natural gold Jewelry Manufacturing shop once know as Conner's. And now the company Orocal.

Wherever the effects of erosion took place. That would include rivers, streams, ancient dried up river channels, and underground riverbeds. Gold nuggets range from 75 to 95 fine 18-23KT gold and can have other mineral content such as silver and copper mixed in with it. What sizes do they come in? Gold Nuggets come in all sizes, the smaller one range in sizes from 1 millimeter up to 6 and is often referred to as flakes.

They can be found in rivers and streams using a gold pan or suction dredges that act like an underground vacuum cleaner. Larger operations use large machinery that digs up huge sections of dirt weighing several tons and run it through machines that separate the gold from the dirt. Nuggets are also found using a metal detector. They are weighed by the troy ounces. 12 ounces = one pound which differs from the weight which is 16 ounces to the pound. The troy ounces are broke up into 20-penny weight to the ounces and use the symbol DWT or by the grams which have 31.1 to the ounces. The larger the nugget the more rare and valuable they are.

What do we mean by Authentic, Genuine, Natural Gold Nuggets Not all Gold nuggets are natural, some people man-make them by taking smaller gold flakes melting them, and casting them into the shape of a nugget. Make sure to ask if they are genuine natural gold nuggets as found by the miners and come with a certificate of authenticity. Quarter to give you an idea of Size Proportion. This item is in the category "Coins & Paper Money\Bullion\Gold\Nuggets".