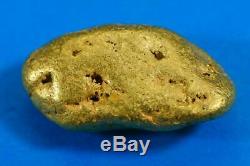 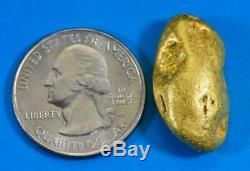 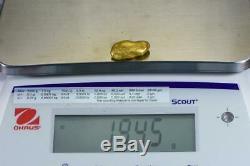 Authentic Alaskan BC Natural Gold Nugget 19.45. All Nuggets are Pictured or Partially Pictured with a U. Quarter which is 24.5MM in diameter to give you an idea of size. What is a Natural Gold Nugget? It is a piece of gold that broke out of quartz deposits within the earth when erosion took place.

Not all Gold nuggets are natural, some people man-make them by taking smaller gold flakes melting them and casting them into the shape of a nugget. Make sure to ask if they are genuine natural gold nuggets as found by the miners and come with a certificate of authenticity. In November of 2013 I opened up my Gold Nugget store. With thousands of satisfied customers I will continue to strive to provide the highest quality, largest selection and best priced gold nuggets on. The item "#489A-C Alaskan BC Natural Gold Nugget 19.45 Grams Genuine" is in sale since Thursday, April 16, 2020.