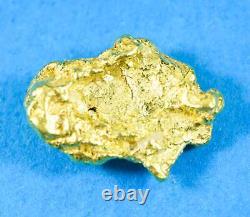 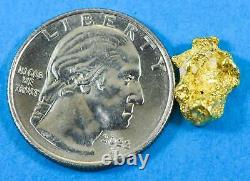 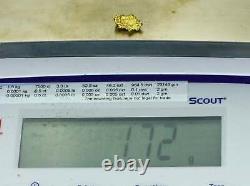 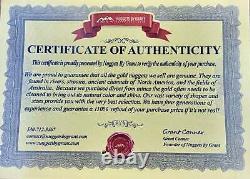 Authentic Alaskan BC Natural Gold Nugget 1.72 grams. Dawson and Atlin mining only uses water and no chemicals, this is the most ethical and eco-friendly way to mine gold, and you typically call it placer mining. Our miners work hard at recovering the land from previous damages done by the old methods. We see results of land growing back vegetation and animal life within 1- 6 years. This vast region of Atlin, British Columbia, has the most diverse purity in gold with all sorts of other elements like silver and copper. Nuggets that are closer to the bedrock are reddish. Ones that have more silt are greenish. The Gold Nuggets in this region run from 82-86% pure. Natural Nuggets are never 100% pure as they always have other minerals in them. All Nuggets are Pictured or Partially Pictured with a U. Quarter, which is 24.5MM in diameter to give you an idea of the size. What is a Natural Gold Nugget? It is a piece of gold that broke out of quartz deposits within the earth when erosion took place. It also goes by the name Placer Gold and each piece is one of a kind, with no two being identical. Where can they be found?

Wherever the effects of erosion took place. That would include rivers, streams, ancient dried-up river channels, and underground riverbeds. Gold nuggets range from 65 to 95 fine 16-23KT gold and can have other mineral content such as silver and copper mixed in with it.

Gold Nuggets come in all sizes. The smaller ones range in sizes from 1 millimeter to 6, often referred to as flakes. Bigger flakes are called nuggets and have been found as large as 2500 ounces, although almost all nuggets bigger than 300 ounces were melted.

How Are Natural Gold Nuggets found? They can be found in rivers and streams using a gold pan or suction dredges that act like underground vacuum cleaners. More extensive operations use large machinery that digs up huge sections of dirt weighing several tons and run it through machines that separate the gold from the earth. Nuggets are also found using a metal detector. They are weighed by the troy ounces: 12 ounces = one pound, which differs from the typical weight, 16 ounces = one pound.

The troy ounces are broken up into 20-penny weight to the ounces and use the symbol DWT or by the grams with 31.1 to the ounces. The larger the nugget, the more rare and valuable they are. A one-ounce nugget is now considered as rare as a five-carat diamond.

How many of those do you own? Why are some real bright and others dull? Because it was formed underground in quartz deposits, you often find quartz mixed in. When they broke off into the rivers and streams, they rubbed against the sand and gravel, which gave the nuggets its texture but dulled it.

They can be cleaned in different solutions and then tumbled in other mediums to give it the shine. What do we mean by My Authentic Natural Gold Nuggets under 4 grams come from two primary sources?

One is located near Dawson in the Yukon Territory. Skagway was where the 1898 Klondike gold rush miners traveled to reach the goldfields. Why do I describe them as Alaskan Yukon BC Nuggets Genuine, Natural Gold Nuggets?

Not all Gold nuggets are natural; some people man-make them by taking smaller gold flakes, melting them, and casting them into the shape of a nugget. Make sure to ask if they are genuine natural gold nuggets found by the miners and come with a certificate of authenticity. About Nuggets by Grant: Passion - Legacy - Experience. In November of 2013, I opened up my Gold Nugget store. Since then, I have served thousands of satisfied customers.

I will continue to strive to provide the highest quality, largest selection, and best-priced gold nuggets available online. These gold nuggets range in size from small fines to 40-ounces.

If you are looking for a specific size, I will have it or source it in the quality and value you desire. You will receive a certificate of authenticity backed by Orocal.

I believe in ethically sourcing all of the gold available on Nuggets By Grant. I work hard to ensure the workers and the environment remain safeguarded in the mining process. I also endeavor to invest and use my resources to give back to the earth with projects such as Gold into Water. This item is in the category "Coins & Paper Money\Bullion\Gold\Nuggets".

The seller is "nuggetsbygrant" and is located in this country: US.