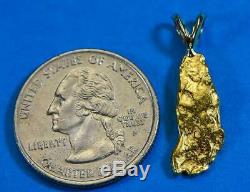 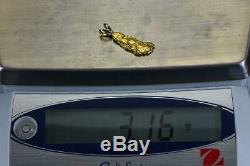 Authentic Natural Gold Nugget Pendant weighs 3.16 grams. The nugget assay around 82-86% , 20-21kt. No authentic gold nugget is 24kt as a natural one will contain other mineral. Please note the pendant bale is made of 10Kt for durability on our smaller die struck or 14kt gold on our larger bales that are casted.

Make sure to ask if they are genuine natural gold nuggets as found by the miners and come with a certificate of authenticity. The item "#582 Alaskan-Yukon BC Natural Gold Nugget Pendant 3.16 Grams Authentic" is in sale since Tuesday, July 23, 2019.