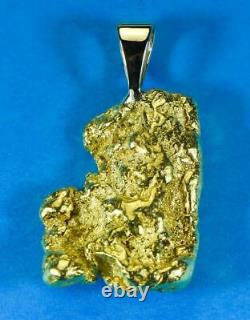 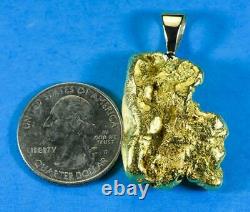 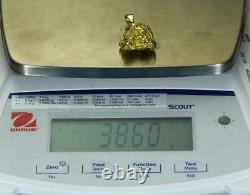 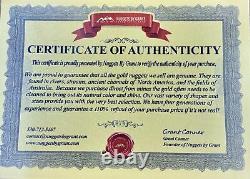 No authentic gold nugget is 24kt as a natural one will contain other minerals. Please note the pendant bale is made of 10Kt for durability on our smaller die struck or 14kt gold on our larger bales that are casted.

They do not include a chain. Each Nugget is filmed next to a US quarter that is 24.5MM in diameter. We test our nuggets by sound, torch, and scope and guarantee they are authentic and not man-made. What is a Natural Gold Nugget? It is a piece of gold that broke out of quartz deposits within the earth when erosion took place. It also goes by the name Placer Gold and each piece is a one of a kind with no two being exactly alike. Where can they be found?

Wherever the effects of erosion took place. That would include rivers, streams, ancient dried up river channels, and underground riverbeds. Gold nuggets range from 65 to 95 fine 16-23KT gold and can have other mineral content such as silver and copper mixed in with it.

They are weighed by the troy ounces. 12 ounces = one pound which differs from weight which is 16 ounces to the pound. The troy ounces are broke up into 20-penny weight to the ounces and use the symbol DWT or by the grams which have 31.1 to the ounces. The larger the nugget the more rare and valuable they are. A one-ounce nugget is now considered as rare as a five-carat diamond.

The item "#611 Alaskan-Yukon BC Natural Gold Nugget Pendant 38.60 Grams Authentic" is in sale since Wednesday, June 23, 2021. This item is in the category "Coins & Paper Money\Bullion\Gold\Nuggets". The seller is "nuggetsbygrant" and is located in Oroville, California. This item can be shipped to North, South, or Latin America, all countries in Europe, Japan, Australia.