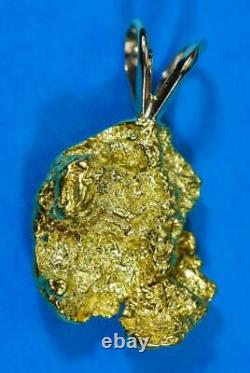 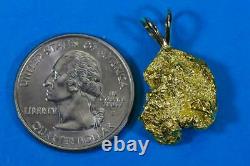 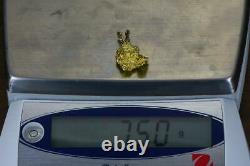 Authentic Natural Gold Nugget Pendant weighs 7.50 grams. The nugget assay around 82-86% , 20-21kt. No authentic gold nugget is 24kt as a natural one will contain other mineral. Please note the pendant bale is made of 10Kt for durability on our smaller die struck or 14kt gold on our larger bales that are casted. They do not include a chain.

The troy ounces are broke up into 20-penny weight to the ounces and use the symbol DWT or by the grams which has 31.1 to the ounces. The larger the nugget the more rare and valuable they are. A one-ounce nugget is now considered as rare as a five-carat diamond. How many of those do you own? Why are some real bright and others dull? Because it was formed underground in quartz deposit you often find quartz mixed in with it. When they broke off into the rivers and streams they tumbled against the sand and gravel, which gave the nuggets, it's texture but dulled it. They can be cleaned in different solutions, and then tumbled in different media to give it the shine.

Make sure to ask if they are genuine natural gold nuggets as found by the miners and come with a certificate of authenticity. The item "#684 Alaskan-Yukon BC Natural Gold Nugget Pendant 7.50 Grams Authentic" is in sale since Friday, June 5, 2020. This item is in the category "Coins & Paper Money\Bullion\Gold\Nuggets". The seller is "nuggetsbygrant" and is located in Oroville, California. This item can be shipped to United States.