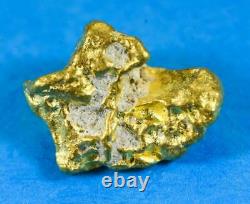 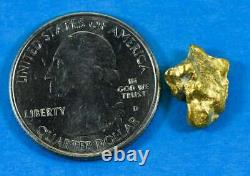 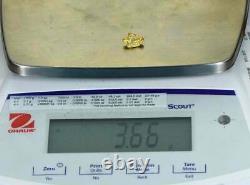 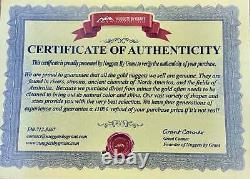 Authentic Australian Natural Gold Nugget weighs 3.66 Grams left unclean with quartz as found. Most of my Australian nuggets come from Victoria's Gold Triangle area. Australian nuggets are very high in purity running from 94-98% pure. All Nuggets are Pictured or Partially Pictured with a U. S Quarter which is 24.5MM in diameter to give you an idea of Size Proportion.

Natural Gold Nugget Pioneering from the Australian plains, fields, & the tip of a metal detector uncleaned direct to your living room..... Through using my resources at the world number one Natural gold Jewelry Manufacturing shop once know as Conner's. And now the company Orocal. If it isn't authentic. The Details Behind Your Gold Nugget. What is a Natural Gold Nugget? It is a piece of gold that broke out of quartz deposits within the earth when erosion took place. It also goes by the name Placer Gold and each piece is a one of a kind with no two being exactly alike. Where can they be found?

Wherever the effects of erosion took place. That would include rivers, streams, ancient dried up river channels, and underground riverbeds.

Gold nuggets range from 75 to 95 fine 18-23KT gold and can have other mineral content such as silver and copper mixed in with it. What sizes do they come in? Gold Nuggets come in all sizes, the smaller one range in sizes from 1 millimeter up to 6 and is often referred to as flakes. Bigger flakes are called nuggets and have been found as large as 2500 ounces although almost all nuggets bigger than 300 ounces were melted. How Are Natural Gold Nuggets found? They can be found in rivers and streams using a gold pan or suction dredges that act like an underground vacuum cleaner. Larger operations use large machinery that dig up huge sections of dirt weighing several tons and run it through machines that separate the gold from the dirt. Nuggets are also found using a metal detector.