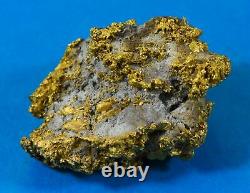 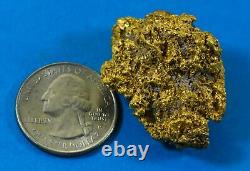 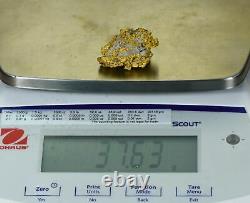 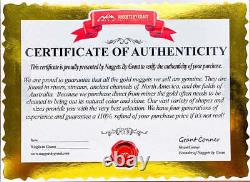 Australian Natural Gold Nugget with Quartz Weighs 37.63. Most of my Australian nuggets come from Victoria's Gold Triangle area. All Nuggets are Pictured or Partially Pictured with a U. S Quarter which is 24.5MM in diameter to give you an idea of Size Proportion. Natural Gold Nugget Pioneering from the Australian plains, fields, & the tip of a metal detector uncleaned direct to your living room.... Through using my resources at the world number one Natural gold Jewelry Manufacturing shop once know as Conner's. And now the company Orocal. If it isn't authentic. The Details Behind Your Gold Nugget. What is a Natural Gold Nugget? It is a piece of gold that broke out of quartz deposits within the earth when erosion took place. It also goes by the name Placer Gold and each piece is a one of a kind with no two being exactly alike.

12 ounces = one pound which differs from weight which is 16 ounces to the pound. The troy ounces are broke up into 20-penny weight to the ounces and use the symbol DWT or by the grams which has 31.1 to the ounces. The larger the nugget the more rare and valuable they are. A one-ounce nugget is now considered as rare as a five-carat diamond. How many of those do you own? Why are some real bright and others dull? Because it was formed underground in quartz deposit you often find quartz mixed in with it. When they broke off into the rivers and streams they tumbled against the sand and gravel, which gave the nuggets, it's texture but dulled it. They can be cleaned in different solutions, and then tumbled in different media to give it the shine. What do we mean by Authentic, Genuine, Natural Gold Nuggets? Not all Gold nuggets are natural, some people man-make them by taking smaller gold flakes melting them and casting them into the shape of a nugget. Make sure to ask if they are genuine natural gold nuggets as found by the miners and come with a certificate of authenticity. Australian nugget are very high in purity running from 94-98% pure. Each nugget comes with a.

In November of 2013 I opened up my Gold Nugget store. With thousands of satisfied customers I will continue to strive to provide the highest quality, largest selection and best priced gold nuggets on. My Source for Australian Gold Nuggets for Sale the GoldenTriangle. Except for the richer and more extensive gold-bearing fields of California, the gold production in the State of Victoria was once greater than in any other country in the world. The state's greatest yield within a single year occurred in 1856; where a documented recovery of 3,053,744 troy ounces of gold was achieved.

Originally, the first discovery of gold in Victoria was made by the Hon. Campbell, when he found several small pieces of native gold in quartz at Clunes, in March of 1850. However, the discovery was kept secret and only became official when Campbell revealed the find on January 10, 1851. Specimens were shown to analyst and physician, Dr.

Four days later, reports of the existence of gold in the quartz rocks of Anderson's Creek, a tributary of the Yarra River near Warrandyte, surfaced after it was found by Mr. Louis John Michel and his party. Almost simultaneously, another occurrence of gold was found at the Pyrenees Mountains, again by Mr.

And not too long after, the numerous goldfields near Mount Alexander were found. The third discovery was made by Mr. Thomas Hiscock, who found a deposit in the gully of the Buninyong Ranges on August 8, 1851. On July of 1851, Thomas Peters discovered specks of gold at what is now known as Specimen Gully.

The discovery triggered a rush to the Mount Alexander area. In November of the same year, gold was found at Forest Creek centered on present-day Castlemaine. It marked the beginning of the largest of all Victorian gold discoveries and claimed as the richest shallow alluvial goldfield in the world. By December, further discoveries followed, with even more gold found in the area now known as Bendigo. Within just a few decades, Victoria transformed from a small pastoral settlement to a wealthy and proud colony as goldfields sprouted and stretched from Ararat and Stawell in the western districts to Beechworth, Daylesford and Ovens River to the northwest in 1852; Bright, Omeo, and Avoca towards the mountainous regions during 1858-59; and, Walhalla in 1863. However, these discoveries were soon surpassed by the Ballarat and Bendigo finds. In November 1906, a remarkable discovery of gold was made near Tarnagulla, where a miner who had patiently prospected the area for a long time recovered seven ounces of gold from a shaft nineteen feet deep, including some fairly large nuggets. This find sparked the so-called Poseidon rush.

This item is in the category "Coins & Paper Money\Bullion\Gold\Nuggets". The seller is "nuggetsbygrant" and is located in this country: US. This item can be shipped to North, South, or Latin America, all countries in Europe, Japan, Australia.