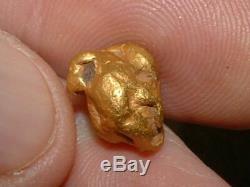 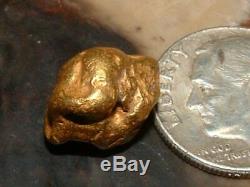 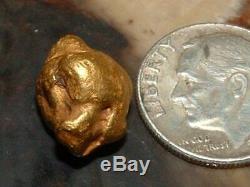 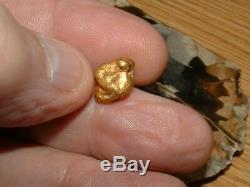 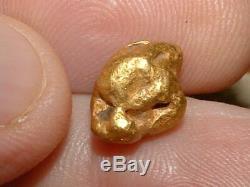 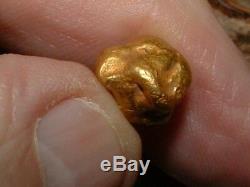 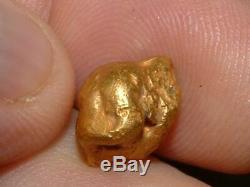 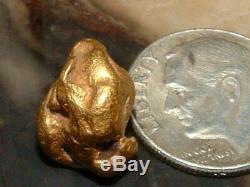 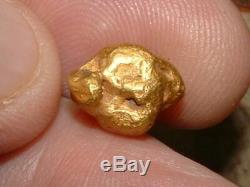 I currently have another California slug of almost 1/2 oz listed. It's also quite the globule. M y sources say both were found in California - The origin of this one is Mariposa County. This oro is very golden in color, a good indication of high purity.

I have not had it tested to determine the exact fineness, but would estimate it in the neighborhood of 900 fine, much higher than your average 14K gold wedding band i. You don't find large ones with this character too often. My first quarter-ouncer found near Yuma, Arizona resembled a human brain.

Cool' would have been a weak adjective. The nugget listed here is a brilliant golden in color and, like so many weathered, river-worn nuggets, appears almost to be sculpted.

Bank in my mining days, I managed to find larger ones, but they were few and far between. This one is guaranteed completely-natural and, except for a light cleaning, just as found.

Hydrothermal solutions carrying gold and silica crystallized into veins of gold quartz. This specimen comes from one of the many vein systems sourcing the immense placer deposits of the Sierra Nevada Mtns, the famed Mother Lode. 15.43 GRAINS = 1 GRAM. 31.103 GRAMS = 1 TROY OUNCE.

We leave no stones un-turned insuring our customers get what they bargained for. If you're not satisfied with this item, contact me.

D uring my years of mining, I only found one platinum matrix specimen. I had it cached away in my collection for 15 years never knowing for certain what it truly was. It came from the depths of the Trinity River, California back in the 1980s.

Going through black sand concentrates at season's end, I noticed a larger rock which was unnaturally-heavy on one side. After a long day underwater, thinking I wold examine it more closely at a later date, it was thrown into a bucket of classified black sand. Occasionally, oddities show up in your sluicebox, minerals or artifacts which can't be quickly identified. Meteorites, platinum nuggets, encrusted coins, diamonds, et al, hiding in river gravels get sucked up along with everything else. I had friends dredging the Trinity who recovered old gold coins and platinum nuggets up to 1/2 ounce.

At the time, I hadn't realized I had scored one myself. Another platinum group mineral native to the area was irridium, a PGM mineral rarity recovered locally as small silvery flakes.

The metal in my platinum specimen looked identical to Tullameen Pt nuggets, but none of those specimens had matrix attached. Knowing platinum is associated with Chromite and Olivine, I did visual comparisons with different varieties of Olivine and the matrix on my metallic platinum appeared to be an Olivine aggregate. The broader term, as one Tulameen miner-consultant referred to it, is Dunite which is roughly 90% Olivine. Some crystals in the mineral complex were dark green, some lighter green in color and smaller in size. Size-wise, this specimen was roughly 1/3 platinum alloy and 2/3 matrix. By weight, the proportions were roughly reversed. Thanks for checking out our digs. G old of E ldorado 8-13-17. The item "CALIFORNIA GOLD NUGGET FOR RING 7.51 GRAM NATURAL GOLD" is in sale since Friday, May 29, 2020.

This item is in the category "Collectibles\Rocks, Fossils & Minerals\Crystals & Mineral Specimens\Crystals". The seller is "egm947" and is located in Banks, Oregon. This item can be shipped worldwide.