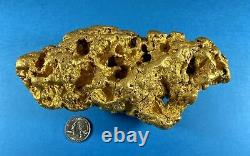 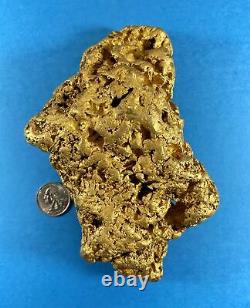 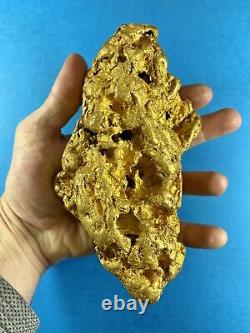 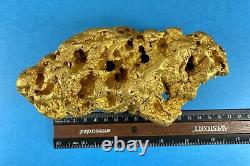 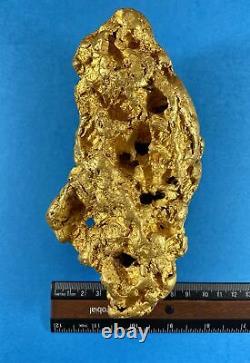 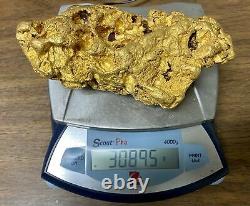 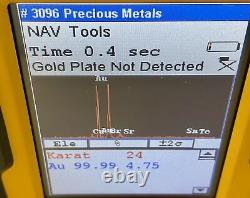 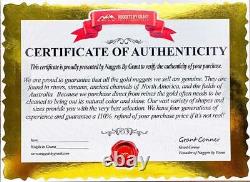 Most of my Australian nuggets come from Victoria's Gold Triangle area. Length = 170 - mm - Width = 112 mm - Thickness = 62 mm. Australian nugget are very high in purity running from. Trace elements under 1% silver, copper, bromine, tin, tellerium. This piece is Extremely RARE based on its size.

There may be only around 150 in the world found to be around the 3 kilo or 100 ounce range. Whoever owns this can have it replicated as well for display purposes.

It is a piece of gold that broke out of quartz deposits within the earth when erosion took place. It also goes by the name Placer Gold and each piece is a one of a kind with no two being exactly alike. Where can they be found? Wherever the effects of erosion took place. That would include rivers, streams, ancient dried up river channels and underground riverbeds. Gold nuggets range from 75 to 95 fine 18-23KT gold and can have other mineral content such as silver and copper mixed in with it.

Larger operations use large machinery that dig up huge sections of dirt weighing several tons and run it through machines that separate the gold from the dirt. Nuggets are also found using a metal detector. They are weighed by the troy ounces. 12 ounces = one pound which differs from weight which is 16 ounces to the pound. The troy ounces are broke up into 20-penny weight to the ounces and use the symbol DWT or by the grams which has 31.1 to the ounces. The larger the nugget the more rare and valuable they are. A one-ounce nugget is now considered as rare as a five-carat diamond. How many of those do you own? Why are some real bright and others dull? Because it was formed underground in quartz deposit you often find quartz mixed in with it. When they broke off into the rivers and streams they tumbled against the sand and gravel, which gave the nuggets, it's texture but dulled it. They can be cleaned in different solutions, and then tumbled in different media to give it the shine. What do we mean by Authentic, Genuine, Natural Gold Nuggets?

Specimens were shown to analyst and physician, Dr. Bruhn midst his exploration of the mineral resources of the colony.

He then confirmed the authenticity of gold and indications of the precious metal in quartz from what was later known as the celebrated Clune Diggings. As the initial gold find turned out to be uneconomic to market, discoveries around the area were intensified and pushed by the government with corresponding rewards. James Esmond came across the first profitable goldfield in Victoria at Creswick's Creek, a tributary of the Loddon River, in Clunes in July of 1851. Four days later, reports of the existence of gold in the quartz rocks of Anderson's Creek, a tributary of the Yarra River near Warrandyte, surfaced after it was found by Mr. Louis John Michel and his party.

Almost simultaneously, another occurrence of gold was found at the Pyrenees Mountains, again by Mr. And not too long after, the numerous goldfields near Mount Alexander were found.

The third discovery was made by Mr. Thomas Hiscock, who found a deposit in the gully of the Buninyong Ranges on August 8, 1851. On July of 1851, Thomas Peters discovered specks of gold at what is now known as Specimen Gully. The discovery triggered a rush to the Mount Alexander area. In November of the same year, gold was found at Forest Creek centered on present-day Castlemaine.

It marked the beginning of the largest of all Victorian gold discoveries and claimed as the richest shallow alluvial goldfield in the world. By December, further discoveries followed, with even more gold found in the area now known as Bendigo. Within just a few decades, Victoria transformed from a small pastoral settlement to a wealthy and proud colony as goldfields sprouted and stretched from Ararat and Stawell in the western districts to Beechworth, Daylesford and Ovens River to the northwest in 1852; Bright, Omeo, and Avoca towards the mountainous regions during 185859; and, Walhalla in 1863. However, these discoveries were soon surpassed by the Ballarat and Bendigo finds.

In November 1906, a remarkable discovery of gold was made near Tarnagulla, where a miner who had patiently prospected the area for a long time recovered seven ounces of gold from a shaft nineteen feet deep, including some fairly large nuggets. This find sparked the so-called Poseidon rush. The final principal gold rush in Victoria occurred at Berringa, south of Ballarat, during the first decade of the 20th century. Still, gold has continued to be found in recent years with the latest discovery at Wedderburn in 1980.

The item "Crikey She's Dense Natural Gold Nugget Australian 3089.5 Grams 99.34 Troy Ounc" is in sale since Tuesday, June 15, 2021. This item is in the category "Coins & Paper Money\Bullion\Gold\Nuggets". The seller is "nuggetsbygrant" and is located in Oroville, California.