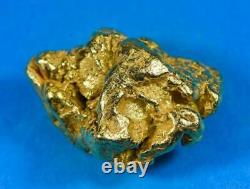 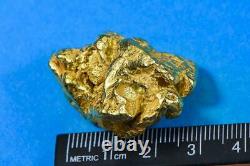 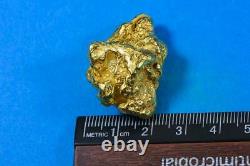 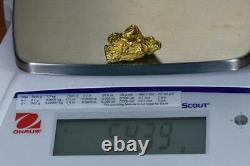 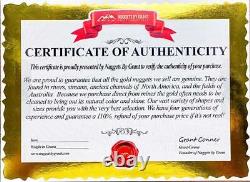 The Gold Nuggets in this region run from. Natural Nuggets are never 100% pure as they always have other mineral in them. This Large Natural Gold Nugget Weighs 54.39 Grams - 1.74 Troy Ounces - Alaskan-Yukon BC Gold Raw Nugget.

Length = 35 mm Width = 24 mm Thickness = 19 mm. Is from Miller Creek, Yukon It was mined on property within Miller Creek Around the early 1900's. The piece has one of the most unique shapes you will ever see In a Large Alaskan Nugget. Its' very smooth yet has a ton of character. This nugget was passed down through a family for generations but now available for sale at Nuggets by Grant.

Found at Miller Creek, the nugget was discovered at the placer gold operations of the creek and rescued from the refining process due to its rare size and beauty. During the early 1900's at this location, the gold was recovered through placer mining, exposing pay-dirt by either shaft mining and or/ hydrualiokling.

The shafts were dug to bed-rock by what is known as wood fires which melted the permafrost and then they drilled once down to the bedrock where the gold sits. As the operations became more larger scale, they used Hydrauliking methdes to expose the gravel containing the gold by water cannons. In both cases the final sluice operations would separate the gold out of the deposits. Large natural gold nuggets are very rare as a one ounce nugget is more rare than a 5 CT diamond. Natural Gold Nuggets can have other mineral content such as silver and copper mixed in with them and are never 24kt gold. Each nugget comes to us directly from the miner in an unclean state. We remove most of the dirt and rock and tumble them to bring out it's natural shine. Each nugget is filmed next to a US quarter that is 24.5MM in diameter to give you an idea of it's size.

Natural Gold Nugget Mined with True Grit from the Earth direct to your living room..... Nuggets by Grant created in 1960 Innovated in 2013.

· What is a Natural Gold Nugget? It is a piece of gold that broke out of quartz deposits within the earth when erosion took place. It also goes by the name Placer Gold and each piece is a one of a kind with no two being exactly alike. · Where can they be found?

Wherever the effects of erosion took place. That would include rivers, streams, ancient dried up river channels and underground riverbeds. · How pure are they? Gold nuggets range from 65 to 95 fine 16-23KT gold and can have other mineral content such as silver and copper mixed in with it. · What sizes do they come in? Gold Nuggets come in all sizes, the smaller one range in sizes from 1 millimeter up to 6 and is often referred to as flakes.

· What do we mean by My Authentic Natural Gold Nuggets under 4 grams come from two main sources. One is located near Dawson in the Yukon Territory. Skagway was where the miners of the 1898 Klondike gold rush traveled through to reach the gold fields. This is the reason I describe them as Alaskan Yukon BC Nuggets.

Quarter to give you an idea of Size Proportion. The item "Large Alaskan BC Natural Gold Nugget 54.39 Grams Genuine 1.74 Troy Ounces" is in sale since Tuesday, October 27, 2020. This item is in the category "Coins & Paper Money\Bullion\Gold\Nuggets". The seller is "nuggetsbygrant" and is located in Oroville, California.