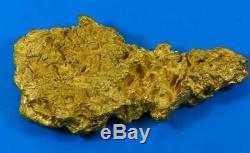 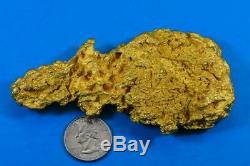 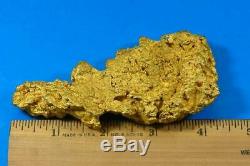 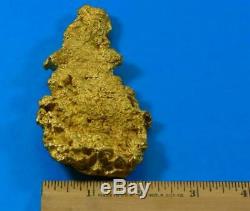 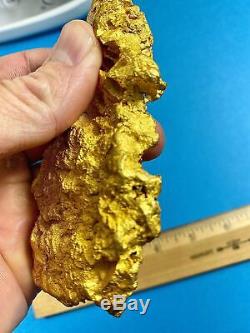 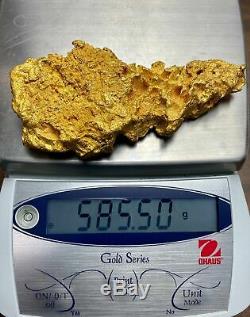 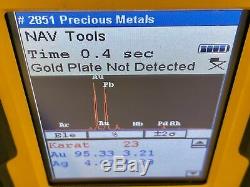 Australian nugget are very high in purity running from. These Nuggets were found in 1951 , 350 miles from Perth, East in The Southern Cross. A man named Cicil & his niece, were digging a Dunny " Outhouse" and at 2 feet in depth they hit an outcropping of Ironstone, They decided to quit & dig a new hole.

About 12 inches down more rock stopped them. They worked at a depth of 4 feet. The next day they came back with bar like a crow bar.

And started chipping away at his original hole, after another 12 inches, he stated to remove the loose rock and saw something. He knew it was Gold. With a little more exertion he removed the Nugget. This had about 2 inches of Ironstone under it.

He thought he was getting the smaller piece but when turning it over he saw it was attached to a 19 ounce nugget. Ceclil told us he went home that evening and drank a lot of spirits.

The next morning he went back to the hole and dug for 6 days and found nothing more. We bought this collection of nuggets from him in 1981. He wanted to fix up his house. The nuggets were called the Southern Cross. When cleaning the nuggets they broke up into 2 sizes.

One is a 585.50 gram. And the other smaller one that was connected that he first saw when digging is the 105.80 gram. The big one Ranges around 95% pure and the smaller one is about 98% pure. They are unique in shape, great character, and a rare find.

Because it was formed underground in quartz deposit you often find quartz mixed in with it. When they broke off into the rivers and streams they tumbled against the sand and gravel, which gave the nuggets, it's texture but dulled it. They can be cleaned in different solutions, and then tumbled in different media to give it the shine. What do we mean by Authentic, Genuine, Natural Gold Nuggets? Not all Gold nuggets are natural, some people man-make them by taking smaller gold flakes melting them and casting them into the shape of a nugget. Make sure to ask if they are genuine natural gold nuggets as found by the miners and come with a certificate of authenticity. Natural Gold Nugget Pioneering from the Australian plains, fields, & the tip of a metal detector uncleaned direct to your living room......

Through using my resources at the world number one Natural gold Jewelry Manufacturing shop once know as Conner's Jewelers and now the company Orocal. Australian nugget are very high in purity running from 94-98% pure. Each nugget comes with a. Certificate of authenticity guaranteeing it to be genuine. My Source for Australian Gold Nuggets for Sale the GoldenTriangle. Except for the richer and more extensive gold-bearing fields of California, the gold production in the State of Victoria was once greater than in any other country in the world.

At Walhalla alone, Cohens Reef produced over 1.6 million troy ounces of gold within 40 years of mining. While traces of gold were earlier found during the 1840s, particularly in the Port Philip area, and its later discoveries at Warrandyte, Clunes and Buninyong in 1851, the intensive gold rushes really started near Ballarat, at Golden Point, including the significant gold finds in Bendigo and Beechworth. At the height of its gold production, Victoria channeled an average of two tons of gold weekly into the Treasury Building in Melbourne. The exported gold to Britain during the 1850s greatly compensated Victoria's entire foreign debts and eventually laid the foundation of the state's large commercial expansion towards the latter half of the century. Originally, the first discovery of gold in Victoria was made by the Hon.

He then confirmed the authenticity of gold and indications of the precious metal in quartz from what was later known as the celebrated Clune Diggings. As the initial gold find turned out to be uneconomic to market, discoveries around the area were intensified and pushed by the government with corresponding rewards. James Esmond came across the first profitable goldfield in Victoria at Creswick's Creek, a tributary of the Loddon River, in Clunes in July of 1851. Four days later, reports of the existence of gold in the quartz rocks of Anderson's Creek, a tributary of the Yarra River near Warrandyte, surfaced after it was found by Mr.

Thomas Hiscock, who found a deposit in the gully of the Buninyong Ranges on August 8, 1851. On July of 1851, Thomas Peters discovered specks of gold at what is now known as Specimen Gully. The discovery triggered a rush to the Mount Alexander area. In November of the same year, gold was found at Forest Creek centered on present-day Castlemaine. It marked the beginning of the largest of all Victorian gold discoveries and claimed as the richest shallow alluvial goldfield in the world. By December, further discoveries followed, with even more gold found in the area now known as Bendigo. Within just a few decades, Victoria transformed from a small pastoral settlement to a wealthy and proud colony as goldfields sprouted and stretched from Ararat and Stawell in the western districts to Beechworth, Daylesford and Ovens River to the northwest in 1852; Bright, Omeo, and Avoca towards the mountainous regions during 1858-59; and, Walhalla in 1863. However, these discoveries were soon surpassed by the Ballarat and Bendigo finds. In November 1906, a remarkable discovery of gold was made near Tarnagulla, where a miner who had patiently prospected the area for a long time recovered seven ounces of gold from a shaft nineteen feet deep, including some fairly large nuggets. This find sparked the so-called Poseidon rush. The final principal gold rush in Victoria occurred at Berringa, south of Ballarat, during the first decade of the 20th century. Still, gold has continued to be found in recent years with the latest discovery at Wedderburn in 1980. Eventually gold mining slowed in Victoria.

It was largely due in part with the high costs of pumping and mining in greater depths, but not because the goldfields have been exhausted completely. The recent increase in gold prices has seen a resurgence of commercial gold mining with operations resuming in the major fields of Ballarat and Bendigo. Further explorations is also underway elsewhere, like in the isolated mountain area of Glen Wills near Mitta Mitta in the northeastern region. Miners are still finding Gold with metal detectors by hand in fields. The item "Large Natural Gold Nugget Australian 585.80 Grams 18.83 Troy Ounces Very Rare" is in sale since Friday, December 6, 2019.